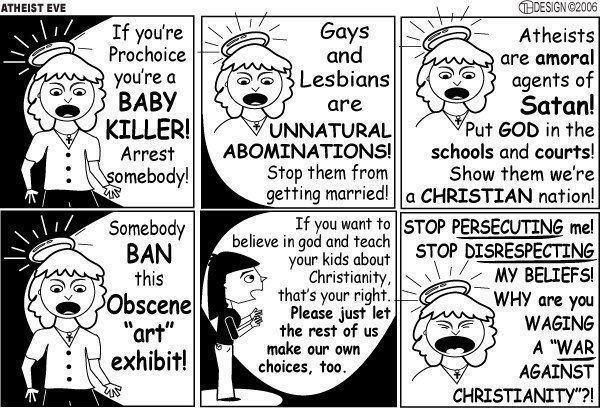 I happen to be a fan of Bill Maher, I think he is fun and entertaining. I recently re-watched his film “Religulous” and also ran into a short series of interviews with Bill Moyers “on Faith & Reason”, as well as a few other items and it started me thinking about the current views of many people regarding organized religion and what many religionists likely view as the new “War on Religion.”About the same time I ran across the following cartoon which really sums up the issues that many non-religious people have with organized religions and their followers: 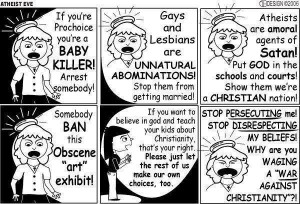 Let’s be honest with ourselves, Religion in many ways has asked for the harsh eye that has been placed on it in recent years. Religion has been used to justify every darkness that lies in the heart and soul of man and the more that one looks into it, the easier it becomes to question if Religion has any validity in the world.

Believers think that they are following the will of God as they see it, as such, they are not usually willing to negotiate their positions.  This is actually fine, believe what you will and act on it in YOUR life, and that is where most religionists lose the game.

People often try to spread the truth of their beliefs into the world and try to persuade others to act in accordance with what their religion teaches. There is often a problem with this in that those who are so busy “spreading the word” are not often as diligent in their practice of the word, I call this “Green Stamp Theology.”

When I was a kid, my Mom would shop often at certain stores where they would give you “S&H Green Stamps” with each purchase. You would take the stamps and fill the books with them and then go to the redemption center and use them to buy items, an early customer rewards program.

As a theology, it works this way, it doesn’t matter what I do as long as I can get   X   number of people to believe the way I do, I can buy my way into the eternity of the chosen. If you ask them, they will nearly always deny this, but this is the outcome of their actions.

Where Religions Lose It

I recently heard an interesting statement;

Fortunately, the problem is not the religions, but the followers. OK, I know you are wondering how this works…

We will use Christianity in this example, but it works for any religion.

Jesus taught a philosophy that made sense to him. He understood what he was trying to pass along to his followers and particularly his disciples. From the writings that have come down to us, I would say that John “got it” more than any other, at least from his writings.

Sadly, the many generations that followed have not understood it, but have done their best to keep it alive.  For the most part, they succeeded, the Gospel of John has survived 1800+ years and is still available to read and study today, now as to if the current interpretation of it has anything to do with the original, that may be another issue (thanks a lot Irenaeus).

Add to this the insertion of Ego that inevitably comes along, the teaching becomes “The Teaching” and sooner or later it goes from being a presentation of Truth to the “One and Only Truth” with all others being false gods and lies of whatever form evil takes, in Christianity it would be Lucifer, the Devil.

Fortunately, there is a saving grace for religion in general, for those who truly seek it out and sift through all that gets piled on top of it, the original truth that was expressed by the teacher is still there. This core truth is often buried under dogmas and theologies, tradition and canon but to those who would search, they will find Truth.

Gospel of Thomas saying 5
This is the saving grace of Religion, if Truth is there, it will remain forever.

Time and tradition may pile on many things to the original source but if you will engage your heart and spirit and be willing to be a touch of an archeologist in your studies, you will reveal the Truth underneath. Turn your brain on, it was given to you for a reason. Pray and/or meditate on your studies, inspiration will almost always follow and point you in the right direction.

Religion is not really about “others” out there, but about YOUR relationship to the Creative Source of the Universe. It is your job to grow within that relationship, let others concern themselves with their growth.  Feel free to share knowledge with those that want it but never enforce your thoughts, beliefs or otherwise onto others, there is more than plenty of examples of how quickly that will fail in the world around us and sadly they are collectively called Religion.

Written by R. A. Burgener

After finishing the 850 mile trek of self-rediscovery on California's El Camino Real from San Diego to Sonoma, California, Robert continued, via Greyhound, to Portland, Oregon, where he is becoming familiar with the concepts of weather and seasons after 30 years in Los Angeles.

Related Posts
Only 2 Questions from Freedom
William Shakespeare wrote "This above all: to thine own self be true, and it must…
The Gloves Come Off…
Someone once said something along the lines of "The true fear is not that the…
Judeo/Christian Paradigms: Karma vs Salvation pt 1
As a Southern Baptist during my youth, I was taught that the Bible was the…

Get our monthly newsletter