The other day, I received a response from Rev. Don Spitz who was not happy about my previous entry where I mentioned the “Army of God.” I put down a bit of a flippant comment of my own to his, but I did go check out his blog and see what he has to say.

There is currently just one entry where he has a single entry where he expresses his disgust for PETA (People for Ethical Treatment of Animals ). They seem to have a couple of campaigns where they use a bit of tongue in cheek humor to put forth the idea that we should not eat meat which he feels is worshipping the created over the creator by quoting:

Who changed the truth of God into a lie, and worshipped and served the creature more than the Creator, who is blessed for ever. Amen.
Romans 1:25(KJV)

Cute choice since the verse is talking about the people who worship animal forms as gods as in idols and such forms. He seems to think that to respect life is to disrespect God. Sad…

After reading the entry and the article it points to, on the Army of God website, I sent him the following comment:

I am sure you found my blog by searching for the, oh so Christian, “Army of God” reference in my latest entry. Other than throwing accusations that I am refusing Jesus, based on what? I have no clue… I may not agree with your theologies, interpretations and dogmas, but I have no denial of Jesus, just the deified idol that people like yourself have turned him into.

As far as the Army of God is concerned, do you really think killing abortionists is any morally higher than being a “baby killer” yourself? Personally, I think it just makes you sound like a complete hypocrite, one reason to kill is immoral, but your reasoning is an acceptable reason… NOT!!!

Your PETA complaints regarding their ads show that you are definitely in need of cultivating a sense of humor. I bet Jesus would have found them quite cute and humorous. Strange that his wrath in the Gospels was always aimed at people like yourself, Pharisees and Sadducees, who are so full of themselves and their holiness, that they had forgotten the spirit of the law for the letter (which brings death, if I remember correctly).

I am sure you mean well, but I will pray that some love for your fellow man might work its way into your heart sometime. If Jesus is nothing but a validation to justify your sense of superiority and judgment, I feel sorry for you.

Sadly, to many people the Reverend, and those like him, are what they believe Christianity is about. The word Christian means to be Christlike. Unfortunately, to most who use this title, it has become a badge of their superiority over their neighbors and others.

Why must we use God and religion to tear ourselves apart? The word religion originally meant “to bind fast” as in the “bond between humans and gods.” Some have defined Religion as originally meaning “to re-link with God.” I have always been tickled that the word “yoga” is Sanskrit for basically the same thing, “to join God.”

I tend to be tough on Religions and Religionists since they have a tendency of turning religion into a justification for self-superiority and degradation of their fellow people, or worse; the local social club. Where this seems to have come in is via personal ego. When we follow one religious path or another, we tend to say “We have THE Truth” instead of saying, more properly, “We have an expression of the Truth.” I have spent nearly two decades studying the scripture and teachings from as many religions as I can get my hands on, and after a while, you see direct correlations between them all. Religion is like a well cut diamond, each facet is another expression of the whole, no single facet entails the whole. When used properly, diamonds can be useful and beautiful, misused it can hurt, damage and in some cases even kill.

When we realize that we are all not separate, but part and parcel of God, that we are all encompassed by the totality of God, we loose the need to be in a seat of judgement over our neighbors. If you believe in the supremacy of and the omnipotence of God, the idea includes that God must be able to determine His/Her will and doesn’t need us to go around killing our fellow humans, physically of spiritually.

Written by R. A. Burgener

After finishing the 850 mile trek of self-rediscovery on California's El Camino Real from San Diego to Sonoma, California, Robert continued, via Greyhound, to Portland, Oregon, where he is becoming familiar with the concepts of weather and seasons after 30 years in Los Angeles.

Related Posts
The Gloves Come Off…
Someone once said something along the lines of "The true fear is not that the…
How to create perfection…
I am often asked just how we can change the world, fix its problems and… 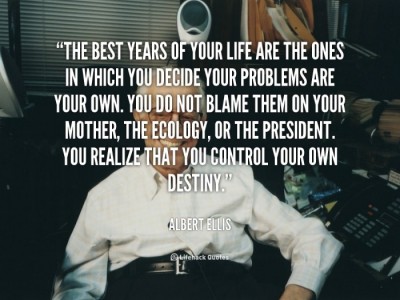 The Power of Change
One of the greatest sources of power is the power of change.  Change creates opportunity,…

Get our monthly newsletter